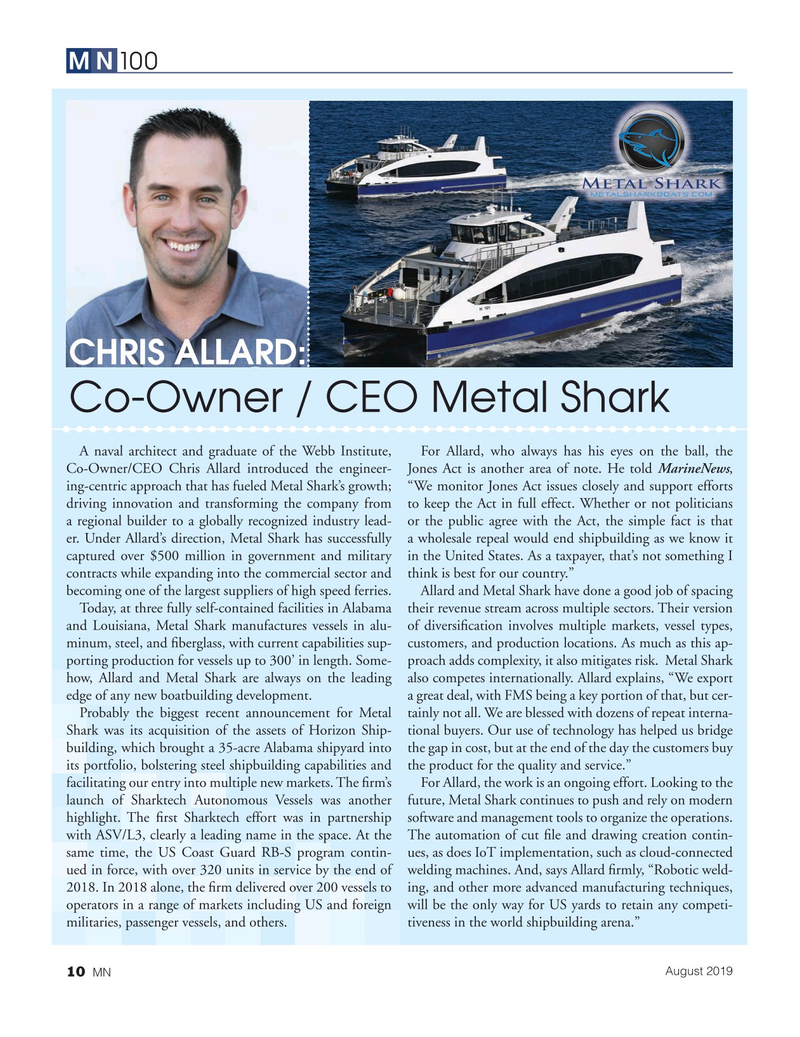 A naval architect and graduate of the Webb Institute, For Allard, who always has his eyes on the ball, the

Co-Owner/CEO Chris Allard introduced the engineer- Jones Act is another area of note. He told MarineNews, ing-centric approach that has fueled Metal Shark’s growth; “We monitor Jones Act issues closely and support efforts driving innovation and transforming the company from to keep the Act in full effect. Whether or not politicians a regional builder to a globally recognized industry lead- or the public agree with the Act, the simple fact is that er. Under Allard’s direction, Metal Shark has successfully a wholesale repeal would end shipbuilding as we know it captured over $500 million in government and military in the United States. As a taxpayer, that’s not something I contracts while expanding into the commercial sector and think is best for our country.” becoming one of the largest suppliers of high speed ferries. Allard and Metal Shark have done a good job of spacing

Today, at three fully self-contained facilities in Alabama their revenue stream across multiple sectors. Their version and Louisiana, Metal Shark manufactures vessels in alu- of diversi? cation involves multiple markets, vessel types, minum, steel, and ? berglass, with current capabilities sup- customers, and production locations. As much as this ap- porting production for vessels up to 300’ in length. Some- proach adds complexity, it also mitigates risk. Metal Shark how, Allard and Metal Shark are always on the leading also competes internationally. Allard explains, “We export edge of any new boatbuilding development. a great deal, with FMS being a key portion of that, but cer-

Probably the biggest recent announcement for Metal tainly not all. We are blessed with dozens of repeat interna-

Shark was its acquisition of the assets of Horizon Ship- tional buyers. Our use of technology has helped us bridge building, which brought a 35-acre Alabama shipyard into the gap in cost, but at the end of the day the customers buy its portfolio, bolstering steel shipbuilding capabilities and the product for the quality and service.” facilitating our entry into multiple new markets. The ? rm’s For Allard, the work is an ongoing effort. Looking to the launch of Sharktech Autonomous Vessels was another future, Metal Shark continues to push and rely on modern highlight. The ? rst Sharktech effort was in partnership software and management tools to organize the operations. with ASV/L3, clearly a leading name in the space. At the The automation of cut ? le and drawing creation contin- same time, the US Coast Guard RB-S program contin- ues, as does IoT implementation, such as cloud-connected ued in force, with over 320 units in service by the end of welding machines. And, says Allard ? rmly, “Robotic weld- 2018. In 2018 alone, the ? rm delivered over 200 vessels to ing, and other more advanced manufacturing techniques, operators in a range of markets including US and foreign will be the only way for US yards to retain any competi- militaries, passenger vessels, and others. tiveness in the world shipbuilding arena.”