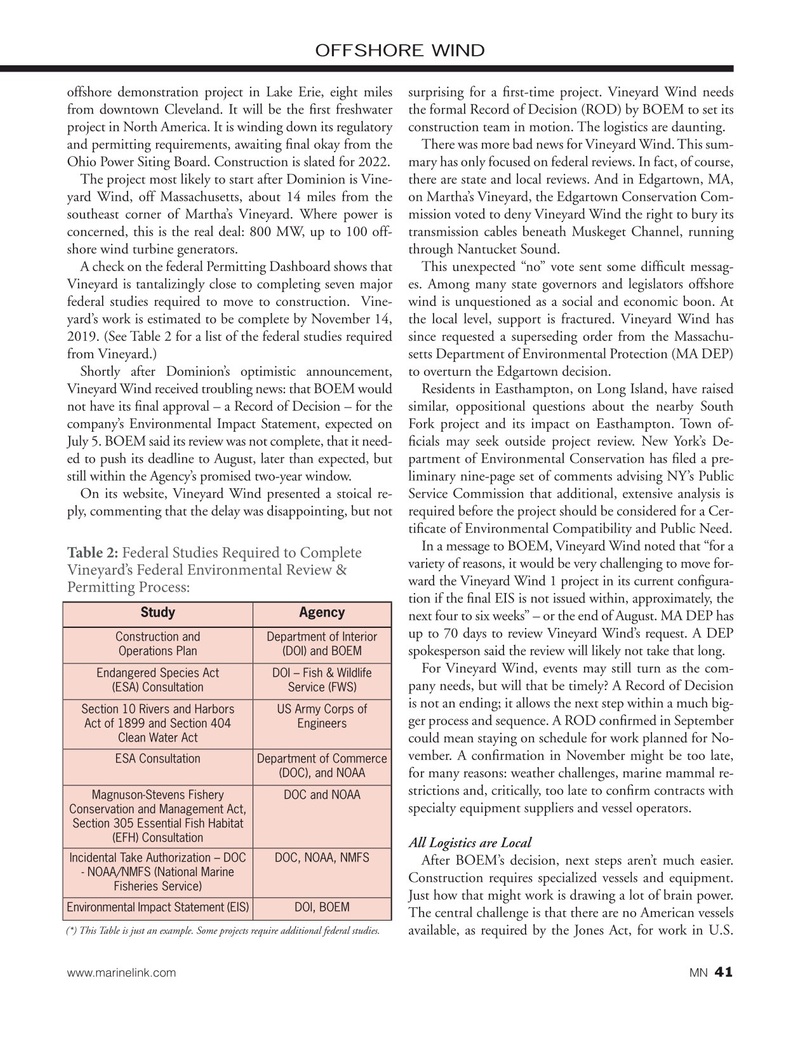 OFFSHORE WIND offshore demonstration project in Lake Erie, eight miles surprising for a ? rst-time project. Vineyard Wind needs from downtown Cleveland. It will be the ? rst freshwater the formal Record of Decision (ROD) by BOEM to set its project in North America. It is winding down its regulatory construction team in motion. The logistics are daunting.

and permitting requirements, awaiting ? nal okay from the There was more bad news for Vineyard Wind. This sum-

Ohio Power Siting Board. Construction is slated for 2022. mary has only focused on federal reviews. In fact, of course,

The project most likely to start after Dominion is Vine- there are state and local reviews. And in Edgartown, MA, yard Wind, off Massachusetts, about 14 miles from the on Martha’s Vineyard, the Edgartown Conservation Com- southeast corner of Martha’s Vineyard. Where power is mission voted to deny Vineyard Wind the right to bury its concerned, this is the real deal: 800 MW, up to 100 off- transmission cables beneath Muskeget Channel, running shore wind turbine generators. through Nantucket Sound.

A check on the federal Permitting Dashboard shows that This unexpected “no” vote sent some dif? cult messag-

Vineyard is tantalizingly close to completing seven major es. Among many state governors and legislators offshore federal studies required to move to construction. Vine- wind is unquestioned as a social and economic boon. At yard’s work is estimated to be complete by November 14, the local level, support is fractured. Vineyard Wind has 2019. (See Table 2 for a list of the federal studies required since requested a superseding order from the Massachu- from Vineyard.) setts Department of Environmental Protection (MA DEP)

Shortly after Dominion’s optimistic announcement, to overturn the Edgartown decision.

Vineyard Wind received troubling news: that BOEM would Residents in Easthampton, on Long Island, have raised not have its ? nal approval – a Record of Decision – for the similar, oppositional questions about the nearby South company’s Environmental Impact Statement, expected on Fork project and its impact on Easthampton. Town of-

July 5. BOEM said its review was not complete, that it need- ? cials may seek outside project review. New York’s De- ed to push its deadline to August, later than expected, but partment of Environmental Conservation has ? led a pre- still within the Agency’s promised two-year window. liminary nine-page set of comments advising NY’s Public

On its website, Vineyard Wind presented a stoical re- Service Commission that additional, extensive analysis is ply, commenting that the delay was disappointing, but not required before the project should be considered for a Cer- ti? cate of Environmental Compatibility and Public Need.

In a message to BOEM, Vineyard Wind noted that “for a

Table 2: Federal Studies Required to Complete variety of reasons, it would be very challenging to move for-

Permitting Process: tion if the ? nal EIS is not issued within, approximately, the

StudyAgency next four to six weeks” – or the end of August. MA DEP has up to 70 days to review Vineyard Wind’s request. A DEP

Construction and Department of Interior spokesperson said the review will likely not take that long.

For Vineyard Wind, events may still turn as the com-

Endangered Species Act DOI – Fish & Wildlife pany needs, but will that be timely? A Record of Decision (ESA) Consultation Service (FWS) is not an ending; it allows the next step within a much big-

Section 10 Rivers and Harbors US Army Corps of ger process and sequence. A ROD con? rmed in September

Clean Water Act could mean staying on schedule for work planned for No- vember. A con? rmation in November might be too late,

ESA ConsultationDepartment of Commerce (DOC), and NOAA for many reasons: weather challenges, marine mammal re- strictions and, critically, too late to con? rm contracts with

All Logistics are Local

Just how that might work is drawing a lot of brain power.

The central challenge is that there are no American vessels (*) This Table is just an example. Some projects require additional federal studies.

available, as required by the Jones Act, for work in U.S. www.marinelink.com MN 41