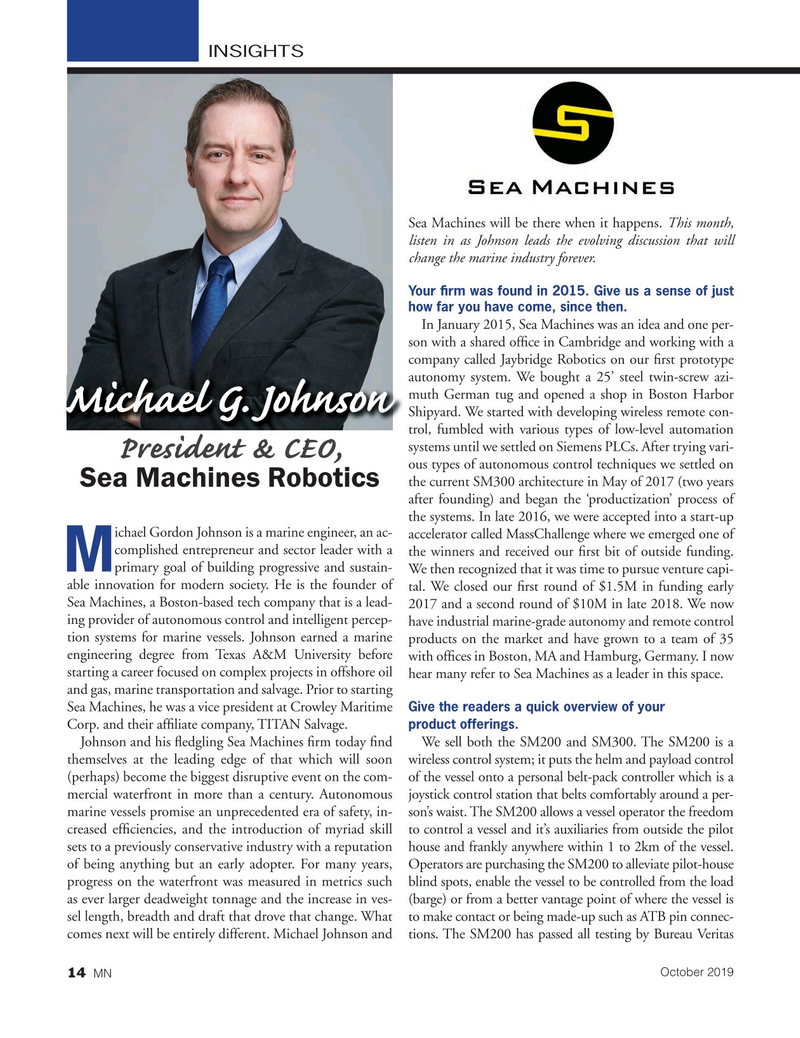 Sea Machines will be there when it happens. This month, listen in as Johnson leads the evolving discussion that will change the marine industry forever.

In January 2015, Sea Machines was an idea and one per- son with a shared of? ce in Cambridge and working with a company called Jaybridge Robotics on our ? rst prototype autonomy system. We bought a 25’ steel twin-screw azi- muth German tug and opened a shop in Boston Harbor

Shipyard. We started with developing wireless remote con- trol, fumbled with various types of low-level automation systems until we settled on Siemens PLCs. After trying vari-

President & CEO, ous types of autonomous control techniques we settled on the current SM300 architecture in May of 2017 (two years

Sea Machines Robotics after founding) and began the ‘productization’ process of the systems. In late 2016, we were accepted into a start-up ichael Gordon Johnson is a marine engineer, an ac- accelerator called MassChallenge where we emerged one of complished entrepreneur and sector leader with a the winners and received our ? rst bit of outside funding.

We then recognized that it was time to pursue venture capi- able innovation for modern society. He is the founder of tal. We closed our ? rst round of $1.5M in funding early

Sea Machines, a Boston-based tech company that is a lead- 2017 and a second round of $10M in late 2018. We now ing provider of autonomous control and intelligent percep- have industrial marine-grade autonomy and remote control tion systems for marine vessels. Johnson earned a marine products on the market and have grown to a team of 35 engineering degree from Texas A&M University before with of? ces in Boston, MA and Hamburg, Germany. I now starting a career focused on complex projects in offshore oil hear many refer to Sea Machines as a leader in this space.

and gas, marine transportation and salvage. Prior to starting

Sea Machines, he was a vice president at Crowley Maritime

Give the readers a quick overview of your

Johnson and his ? edgling Sea Machines ? rm today ? nd We sell both the SM200 and SM300. The SM200 is a themselves at the leading edge of that which will soon wireless control system; it puts the helm and payload control (perhaps) become the biggest disruptive event on the com- of the vessel onto a personal belt-pack controller which is a mercial waterfront in more than a century. Autonomous joystick control station that belts comfortably around a per- marine vessels promise an unprecedented era of safety, in- son’s waist. The SM200 allows a vessel operator the freedom creased ef? ciencies, and the introduction of myriad skill to control a vessel and it’s auxiliaries from outside the pilot sets to a previously conservative industry with a reputation house and frankly anywhere within 1 to 2km of the vessel. of being anything but an early adopter. For many years, Operators are purchasing the SM200 to alleviate pilot-house progress on the waterfront was measured in metrics such blind spots, enable the vessel to be controlled from the load as ever larger deadweight tonnage and the increase in ves- (barge) or from a better vantage point of where the vessel is sel length, breadth and draft that drove that change. What to make contact or being made-up such as ATB pin connec- comes next will be entirely different. Michael Johnson and tions. The SM200 has passed all testing by Bureau Veritas