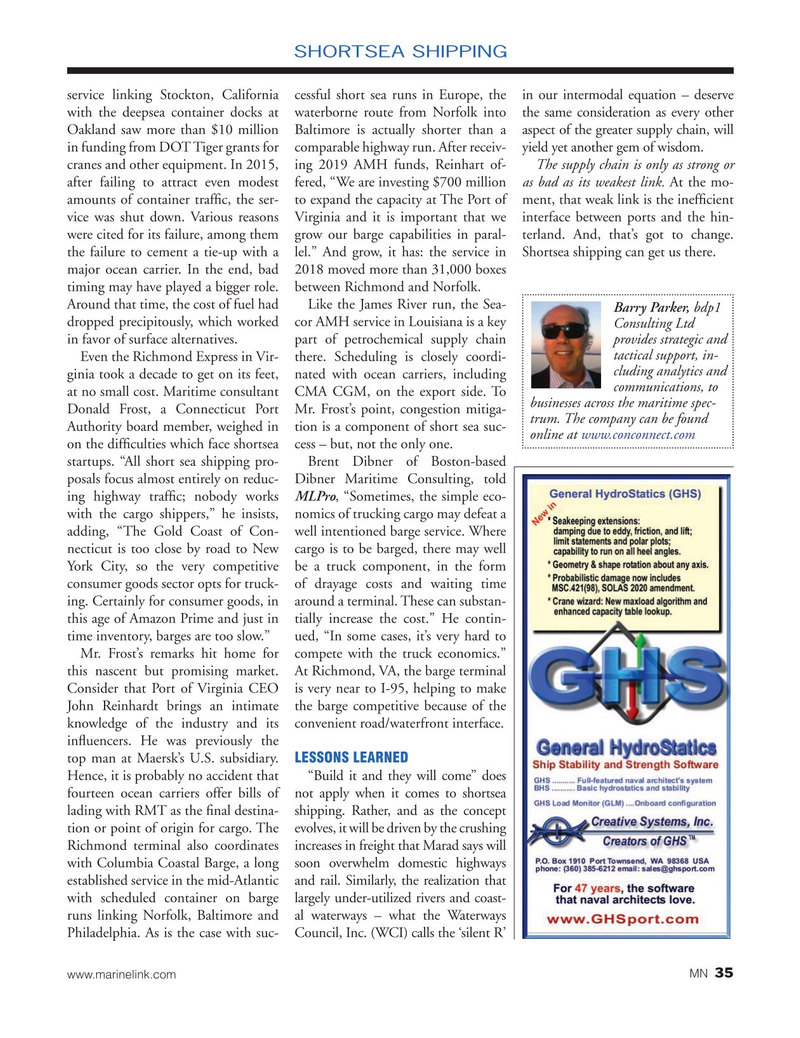 SHORTSEA SHIPPING service linking Stockton, California cessful short sea runs in Europe, the in our intermodal equation – deserve with the deepsea container docks at waterborne route from Norfolk into the same consideration as every other

Oakland saw more than $10 million Baltimore is actually shorter than a aspect of the greater supply chain, will in funding from DOT Tiger grants for comparable highway run. After receiv- yield yet another gem of wisdom.

cranes and other equipment. In 2015, ing 2019 AMH funds, Reinhart of- The supply chain is only as strong or after failing to attract even modest fered, “We are investing $700 million as bad as its weakest link. At the mo- amounts of container traf? c, the ser- to expand the capacity at The Port of ment, that weak link is the inef? cient vice was shut down. Various reasons Virginia and it is important that we interface between ports and the hin- were cited for its failure, among them grow our barge capabilities in paral- terland. And, that’s got to change. the failure to cement a tie-up with a lel.” And grow, it has: the service in Shortsea shipping can get us there. major ocean carrier. In the end, bad 2018 moved more than 31,000 boxes timing may have played a bigger role. between Richmond and Norfolk.

Around that time, the cost of fuel had Like the James River run, the Sea-

Even the Richmond Express in Vir- there. Scheduling is closely coordi- cluding analytics and ginia took a decade to get on its feet, nated with ocean carriers, including communications, to at no small cost. Maritime consultant CMA CGM, on the export side. To businesses across the maritime spec-

Authority board member, weighed in tion is a component of short sea suc- online at www.conconnect.com on the dif? culties which face shortsea cess – but, not the only one. startups. “All short sea shipping pro- Brent Dibner of Boston-based posals focus almost entirely on reduc- Dibner Maritime Consulting, told ing highway traf? c; nobody works MLPro, “Sometimes, the simple eco- with the cargo shippers,” he insists, nomics of trucking cargo may defeat a adding, “The Gold Coast of Con- well intentioned barge service. Where necticut is too close by road to New cargo is to be barged, there may well

York City, so the very competitive be a truck component, in the form consumer goods sector opts for truck- of drayage costs and waiting time ing. Certainly for consumer goods, in around a terminal. These can substan- this age of Amazon Prime and just in tially increase the cost.” He contin- time inventory, barges are too slow.” ued, “In some cases, it’s very hard to

Mr. Frost’s remarks hit home for compete with the truck economics.” this nascent but promising market. At Richmond, VA, the barge terminal

Consider that Port of Virginia CEO is very near to I-95, helping to make

John Reinhardt brings an intimate the barge competitive because of the knowledge of the industry and its convenient road/waterfront interface.

in? uencers. He was previously the top man at Maersk’s U.S. subsidiary. LESSONS LEARNED

Hence, it is probably no accident that “Build it and they will come” does fourteen ocean carriers offer bills of not apply when it comes to shortsea lading with RMT as the ? nal destina- shipping. Rather, and as the concept tion or point of origin for cargo. The evolves, it will be driven by the crushing

Richmond terminal also coordinates increases in freight that Marad says will with Columbia Coastal Barge, a long soon overwhelm domestic highways established service in the mid-Atlantic and rail. Similarly, the realization that with scheduled container on barge largely under-utilized rivers and coast- runs linking Norfolk, Baltimore and al waterways – what the Waterways

Philadelphia. As is the case with suc- Council, Inc. (WCI) calls the ‘silent R’ 35 www.marinelink.com MN