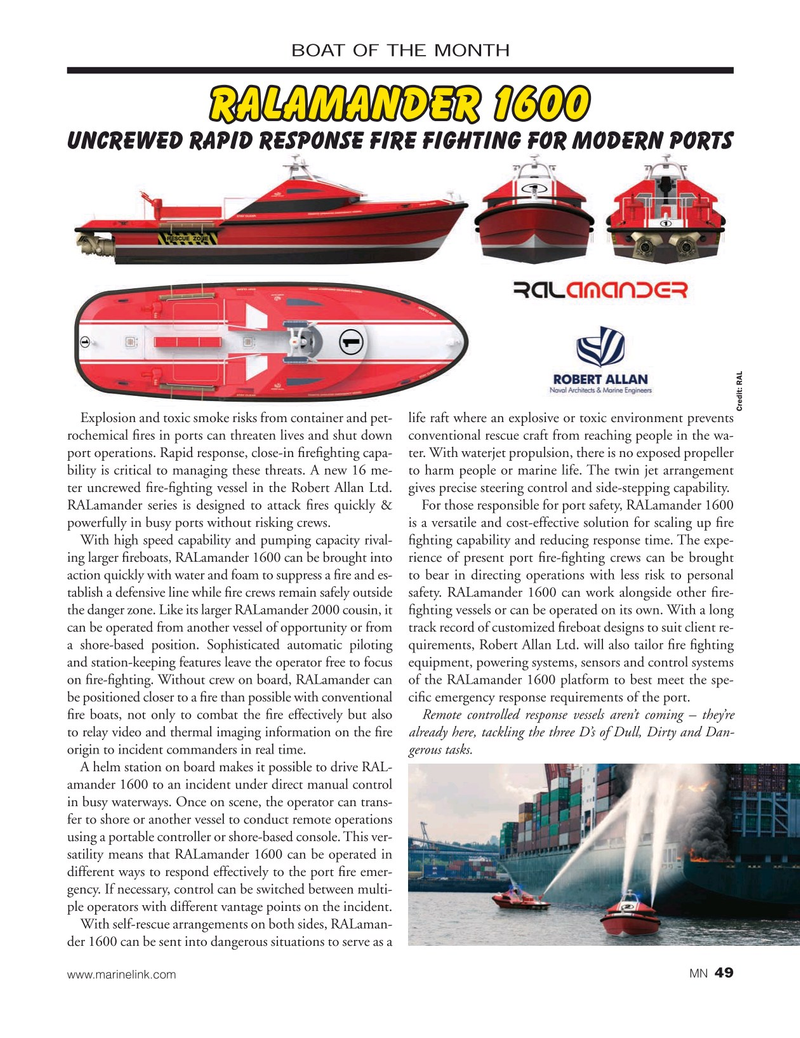 BOAT OF THE MONTH

Explosion and toxic smoke risks from container and pet- life raft where an explosive or toxic environment prevents rochemical ? res in ports can threaten lives and shut down conventional rescue craft from reaching people in the wa- port operations. Rapid response, close-in ? re? ghting capa- ter. With waterjet propulsion, there is no exposed propeller bility is critical to managing these threats. A new 16 me- to harm people or marine life. The twin jet arrangement ter uncrewed ? re-? ghting vessel in the Robert Allan Ltd. gives precise steering control and side-stepping capability.

RALamander series is designed to attack ? res quickly & For those responsible for port safety, RALamander 1600 powerfully in busy ports without risking crews. is a versatile and cost-effective solution for scaling up ? re

With high speed capability and pumping capacity rival- ? ghting capability and reducing response time. The expe- ing larger ? reboats, RALamander 1600 can be brought into rience of present port ? re-? ghting crews can be brought action quickly with water and foam to suppress a ? re and es- to bear in directing operations with less risk to personal tablish a defensive line while ? re crews remain safely outside safety. RALamander 1600 can work alongside other ? re- the danger zone. Like its larger RALamander 2000 cousin, it ? ghting vessels or can be operated on its own. With a long can be operated from another vessel of opportunity or from track record of customized ? reboat designs to suit client re- a shore-based position. Sophisticated automatic piloting quirements, Robert Allan Ltd. will also tailor ? re ? ghting and station-keeping features leave the operator free to focus equipment, powering systems, sensors and control systems on ? re-? ghting. Without crew on board, RALamander can of the RALamander 1600 platform to best meet the spe- be positioned closer to a ? re than possible with conventional ci? c emergency response requirements of the port.

? re boats, not only to combat the ? re effectively but also Remote controlled response vessels aren’t coming – they’re to relay video and thermal imaging information on the ? re already here, tackling the three D’s of Dull, Dirty and Dan- origin to incident commanders in real time. gerous tasks.

A helm station on board makes it possible to drive RAL- amander 1600 to an incident under direct manual control in busy waterways. Once on scene, the operator can trans- fer to shore or another vessel to conduct remote operations using a portable controller or shore-based console. This ver- satility means that RALamander 1600 can be operated in different ways to respond effectively to the port ? re emer- gency. If necessary, control can be switched between multi- ple operators with different vantage points on the incident.

With self-rescue arrangements on both sides, RALaman- der 1600 can be sent into dangerous situations to serve as a 49 www.marinelink.com MN