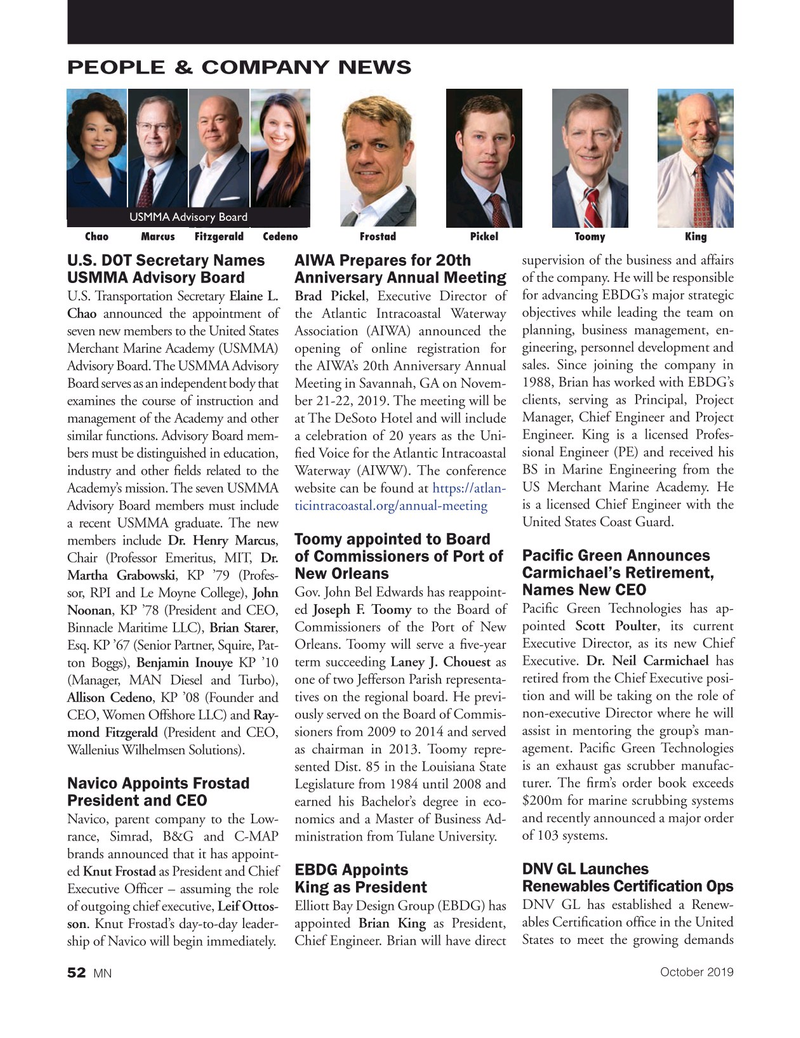 U.S. DOT Secretary Names AIWA Prepares for 20th of the company. He will be responsible

Chao announced the appointment of the Atlantic Intracoastal Waterway objectives while leading the team on seven new members to the United States Association (AIWA) announced the planning, business management, en-

Advisory Board. The USMMA Advisory the AIWA’s 20th Anniversary Annual sales. Since joining the company in

Board serves as an independent body that Meeting in Savannah, GA on Novem- 1988, Brian has worked with EBDG’s examines the course of instruction and ber 21-22, 2019. The meeting will be clients, serving as Principal, Project management of the Academy and other at The DeSoto Hotel and will include Manager, Chief Engineer and Project similar functions. Advisory Board mem- a celebration of 20 years as the Uni- Engineer. King is a licensed Profes- bers must be distinguished in education, ? ed Voice for the Atlantic Intracoastal sional Engineer (PE) and received his industry and other ? elds related to the Waterway (AIWW). The conference BS in Marine Engineering from the

Academy’s mission. The seven USMMA website can be found at https://atlan- US Merchant Marine Academy. He

Advisory Board members must include ticintracoastal.org/annual-meeting is a licensed Chief Engineer with the a recent USMMA graduate. The new United States Coast Guard.

Toomy appointed to Board members include Dr. Henry Marcus, of Commissioners of Port of Paci? c Green Announces

Noonan, KP ’78 (President and CEO, ed Joseph F. Toomy to the Board of Paci? c Green Technologies has ap-

Orleans. Toomy will serve a ? ve-year Executive Director, as its new Chief

Allison Cedeno, KP ’08 (Founder and tives on the regional board. He previ- tion and will be taking on the role of

CEO, Women Offshore LLC) and Ray- ously served on the Board of Commis- non-executive Director where he will mond Fitzgerald (President and CEO, sioners from 2009 to 2014 and served assist in mentoring the group’s man-

Navico, parent company to the Low- nomics and a Master of Business Ad- and recently announced a major order rance, Simrad, B&G and C-MAP ministration from Tulane University. of 103 systems. brands announced that it has appoint-

Executive Of? cer – assuming the role

Chief Engineer. Brian will have direct States to meet the growing demands ship of Navico will begin immediately.