Beneath the Waves: Keep Your AUV Safe by Docking Subsea

Find out about ISEs experiences with getting its Explorer class AUV to dock autonomously during it’s recent sea trials.

The atmosphere on the bridge of ISE’s vessel Researcher is tense. All mission checks are complete; conditions are optimum for docking; everything looks good. The vehicle, a 5-meter-long Autonomous Underwater Vehicle (or AUV), is on mission underwater. Updates from the AUV are now limited to acoustic chirps every 30 seconds and everyone is waiting anxiously. Will it succeed?

Whenever an AUV is sent underwater to test new systems it is an exciting time, and for the ISE team onboard Researcher this feeling is nothing new. On this occasion, they were testing the results of their year-long autonomous docking development. The project, funded by Canadian Innovation for Defence Excellence and Security (IDEaS), used both vision and acoustic-based systems to locate, track, and home in on a towed docking station. In this article we will explain the benefits and challenges and how ISE overcame them, as well as looking at the next steps for this project.

AUVs are incredible platforms for collecting subsea data without human intervention. One of their drawbacks, however, is that they still need a support ship to recover them for data download and battery charging. AUVs, like ISE’s Explorer, are on the larger side to allow for longer duration and the integration of higher quality and power-hungry sonar systems. This can make the proposition of recovery even more daunting in heavy seas. It is an added risk for the operators, the operation and the AUV itself. With the ability to dock subsea, mission duration can be increased by allowing operators to recharge and retask the AUV without having to risk potentially dangerous recoveries.

Typically, the AUV deploys a float and line that is used by the operators to bring the AUV closer to the ship. This can be very challenging in harsh seas and there is a risk of the line fouling with the AUV control planes and thruster. Once close enough, the AUV has to mate with a ship that is often pitching and rolling. This stage is extremely dangerous as the recovery infrastructure can easily end up impacting the AUV. As the waves get bigger, so do the dangers.

With subsea docking that AUV can make the connection with the ship infrastructure beneath the waves. This increases mission endurance by allowing operators to recharge and retask the vehicle without having to risk these potentially dangerous recoveries.

There is also an additional benefit: if the docking can be autonomous it can be solely supported by a large Uncrewed Surface Vessel (USV). This radically changes the AUV’s mission capability and by removing a crewed surface ship, the costs are significantly reduced. With the AUV and USV paired like this their mission endurance can be measured in weeks - not hours - and they can both be launched from shore.

IDEaS has a keen interest in persistent maritime surveillance; the Department of National Defense want to know what is entering their waters.  As there is such a vast Canadian coastline needing to be monitored, new thinking is required to find the best solution. Having a USV and AUV working together could be it. 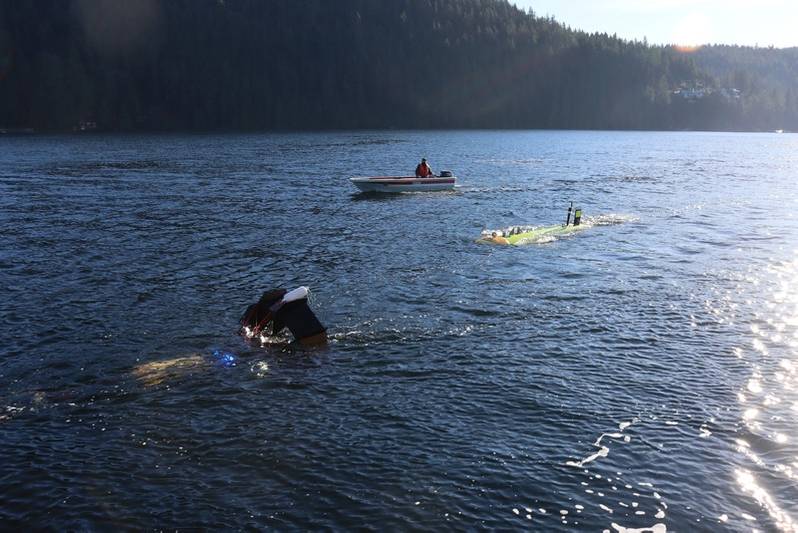 First stage testing was to dock while still on the surface to prove the system works. Photo courtesy International Submarine Engineering Limited

“Range 26 meters. On acoustics.” Jason, one of ISE’s electrical engineers, breaks the silence on the bridge of Researcher. He has just received the first data packet from the AUV. It has successfully acquired the dock’s acoustic signature using its forward looking multibeam echosounder. This is nothing new for the project, and at this point the AUV has repeatedly completed this stage of its mission at ranges up to 100 meters as part of ISE’s testing plan. That said, it is still a big milestone. It means that the AUV has filtered out the strong acoustic returns in its field of view and has identified one that meets the criteria and has adjusted its heading to approach. It must be able to do this on its own as communication with the surface is so limited.

“Range 8 meters. It’s switched to visual tracking.” Jason again reads data from the AUV at the next important milestone. The AUV has assessed that the quality of visual tracking is good enough to switch away from acoustic tracking. It can now see the light array on the dock and is using it to calculate the dock relative position, speed, and attitude. This capability took months to develop using techniques such as computational neural networks to train the vehicle to recognise the LEDs and array being used.

When deciding on the dock design, ISE opted to make it as simple and as passive as possible, taking a similar approach to aircraft in-flight refueling. The reason being that the AUV is already a very capable and maneuverable vehicle. Designing a complex system that required a pilot to aid the docking process wasn’t in the spirit of what they were trying to achieve.

The resulting dock was designed to be a stable platform with a half meter target cone. As long as the AUV impacts within this cone, the dock will self-align and aid the process. It was also designed with a two-part tow cable to help decouple the dock movement from the surface waves. 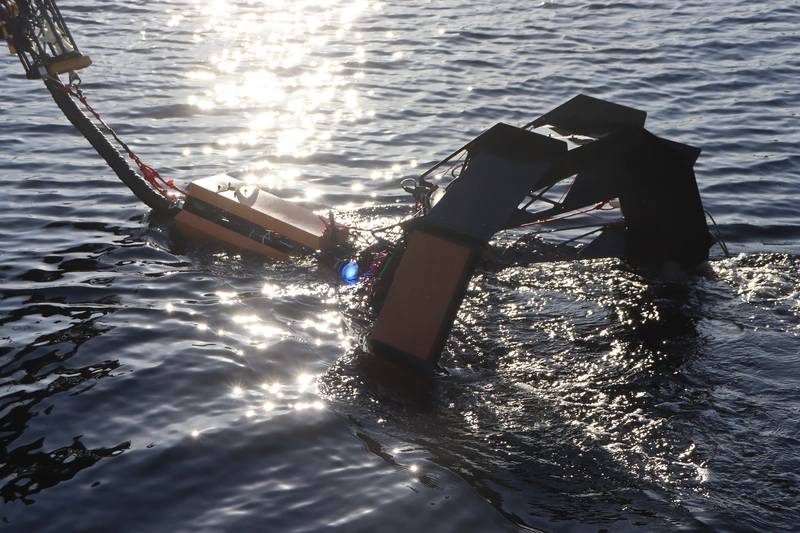 “Range 3.5 meters. We’re on 380.” Back on Researcher, Jason breaks the building tension yet again with the next big event. ‘380’ is the name for the section of the mission where the AUV attempts its final closing stage. It has evaluated that the conditions are good and switched to the next stage. In this phase there are several safety features designed to minimise risk of damage to the AUV and dock. If the vehicle has not received a signal that it has latched within a certain time frame, if it travels over a certain distance, or loses tracking on the LEDs, it will automatically switch to the abort phase of the mission so that it can back away and try again later. These abort conditions were considered at great length by the team at ISE, as trying to hit something with the AUV is the opposite of what they normally intend to do.

Everyone on the bridge is now anxiously waiting for the next update. They've double and triple-checked everything. On previous days, the AUV had completed every part of the mission except this final one, will it succeed? The next update arrives: “We have telemetry, and we’re docked!” It made it!

Although the sense of achievement was felt by the whole ISE team, they weren’t content with docking just once. They wanted to accomplish this repeatedly over several days and gather data on the system performance. This feedback would not only help to inform the next stage design decisions but would prove that the first success wasn’t just luck. Over the next few days, the AUV successfully docked five more times, giving the team plenty of data to work with.

Now ISE has completed this stage of the project there are many options for continued development. Various lessons were learned during these sea trials - as is always the case with prototypes. For example, the dock can be made smaller and simpler to launch and the tracking algorithms can be improved to make them more robust.

For this project ISE focused solely on docking as this was what they identified as the gap in the market. This capability has many benefits and possibilities as previously mentioned. However, if the system were also able to recover the AUV that would open up even more possibilities, especially as more offshore work moves to utilising robotic systems operated from shore.

Whatever the final system looks like, its clear that there is a lot of potential to improve our current subsea survey operations. 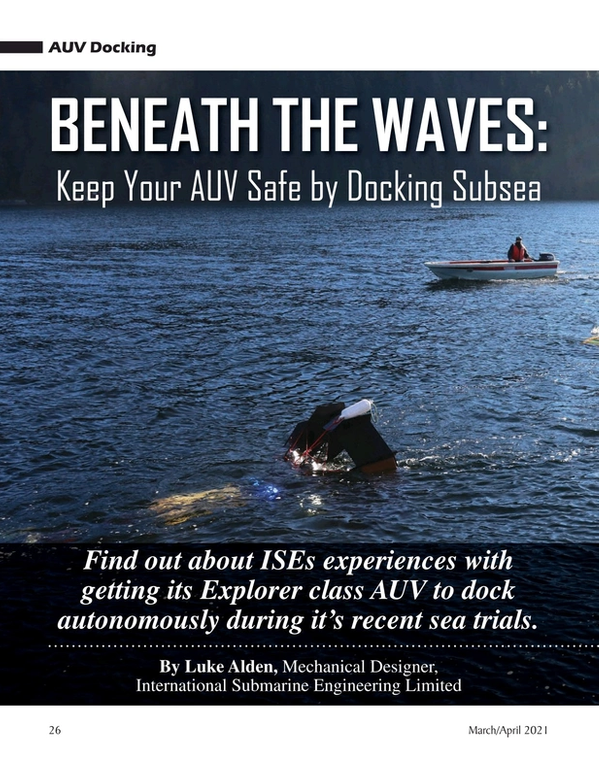 Read Beneath the Waves: Keep Your AUV Safe by Docking Subsea in Pdf, Flash or Html5 edition of March 2021 Marine Technology

Other stories from March 2021 issue