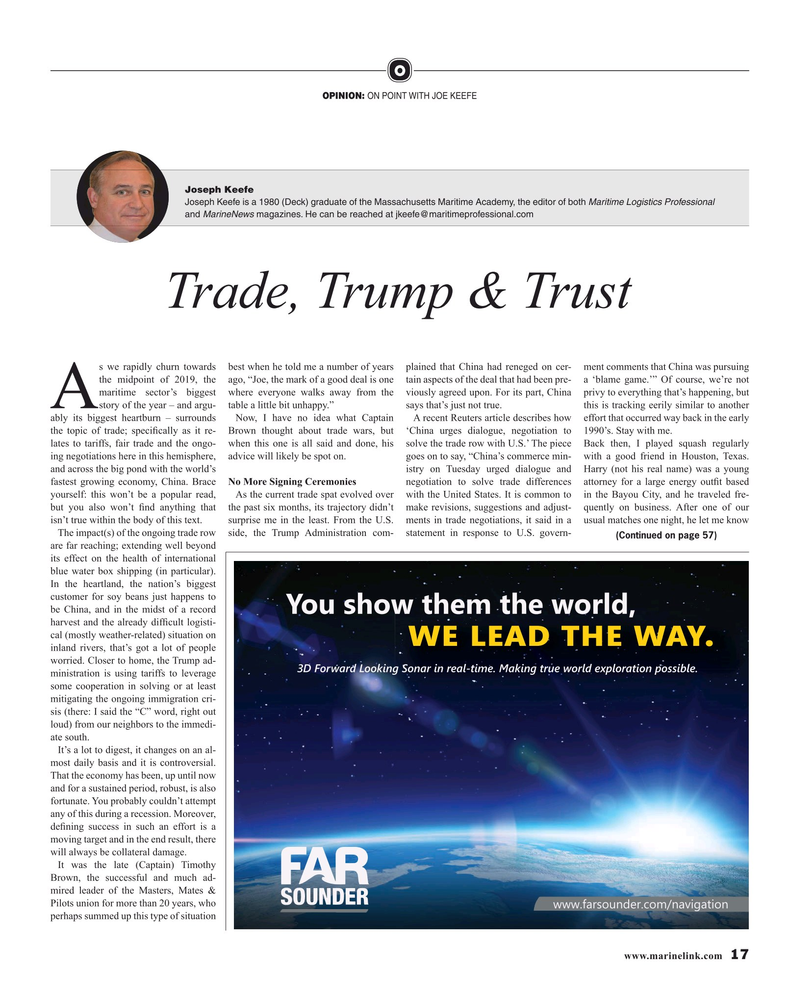 OPINION: ON POINT WITH JOE KEEFE

Joseph Keefe is a 1980 (Deck) graduate of the Massachusetts Maritime Academy, the editor of both Maritime Logistics Professional and MarineNews magazines. He can be reached at jkeefe@maritimeprofessional.com

Trade, Trump & Trust s we rapidly churn towards best when he told me a number of years plained that China had reneged on cer- ment comments that China was pursuing the midpoint of 2019, the ago, “Joe, the mark of a good deal is one tain aspects of the deal that had been pre- a ‘blame game.’” Of course, we’re not maritime sector’s biggest where everyone walks away from the viously agreed upon. For its part, China privy to everything that’s happening, but

Astory of the year – and argu- table a little bit unhappy.” says that’s just not true. this is tracking eerily similar to another ably its biggest heartburn – surrounds Now, I have no idea what Captain A recent Reuters article describes how effort that occurred way back in the early the topic of trade; speci? cally as it re- Brown thought about trade wars, but ‘China urges dialogue, negotiation to 1990’s. Stay with me.

lates to tariffs, fair trade and the ongo- when this one is all said and done, his solve the trade row with U.S.’ The piece Back then, I played squash regularly ing negotiations here in this hemisphere, advice will likely be spot on. goes on to say, “China’s commerce min- with a good friend in Houston, Texas. and across the big pond with the world’s istry on Tuesday urged dialogue and Harry (not his real name) was a young fastest growing economy, China. Brace No More Signing Ceremonies negotiation to solve trade differences attorney for a large energy out? t based yourself: this won’t be a popular read, As the current trade spat evolved over with the United States. It is common to in the Bayou City, and he traveled fre- but you also won’t ? nd anything that the past six months, its trajectory didn’t make revisions, suggestions and adjust- quently on business. After one of our isn’t true within the body of this text. surprise me in the least. From the U.S. ments in trade negotiations, it said in a usual matches one night, he let me know

The impact(s) of the ongoing trade row side, the Trump Administration com- statement in response to U.S. govern- (Continued on page 57) are far reaching; extending well beyond its effect on the health of international blue water box shipping (in particular).

In the heartland, the nation’s biggest customer for soy beans just happens to be China, and in the midst of a record harvest and the already dif? cult logisti- cal (mostly weather-related) situation on inland rivers, that’s got a lot of people worried. Closer to home, the Trump ad- ministration is using tariffs to leverage some cooperation in solving or at least mitigating the ongoing immigration cri- sis (there: I said the “C” word, right out loud) from our neighbors to the immedi- ate south.

It’s a lot to digest, it changes on an al- most daily basis and it is controversial.

That the economy has been, up until now and for a sustained period, robust, is also fortunate. You probably couldn’t attempt any of this during a recession. Moreover, de? ning success in such an effort is a moving target and in the end result, there will always be collateral damage.

It was the late (Captain) Timothy

Brown, the successful and much ad- mired leader of the Masters, Mates &

Pilots union for more than 20 years, who www.farsounder.com/navigation perhaps summed up this type of situation www.marinelink.com 17