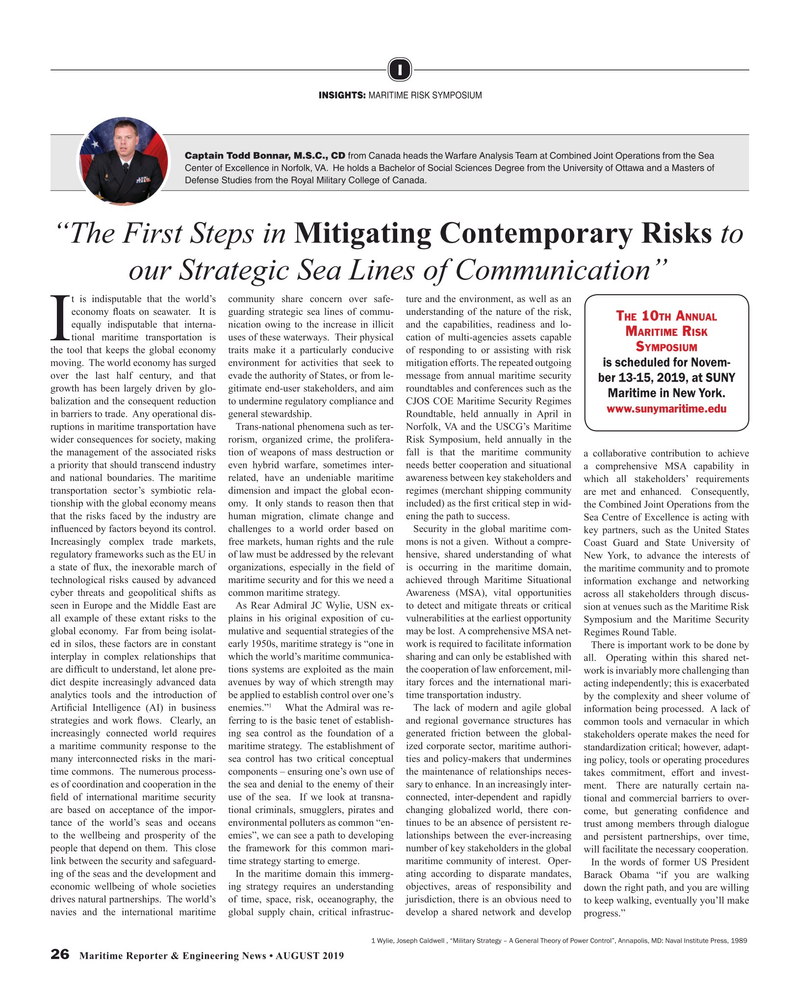 Center of Excellence in Norfolk, VA. He holds a Bachelor of Social Sciences Degree from the University of Ottawa and a Masters of

Defense Studies from the Royal Military College of Canada. “The First Steps in Mitigating Contemporary Risks to our Strategic Sea Lines of Communication” t is indisputable that the world’s community share concern over safe- ture and the environment, as well as an economy ? oats on seawater. It is guarding strategic sea lines of commu- understanding of the nature of the risk,

T 10 A HE TH NNUAL equally indisputable that interna- nication owing to the increase in illicit and the capabilities, readiness and lo-

Itional maritime transportation is uses of these waterways. Their physical cation of multi-agencies assets capable

S YMPOSIUM the tool that keeps the global economy traits make it a particularly conducive of responding to or assisting with risk moving. The world economy has surged environment for activities that seek to mitigation efforts. The repeated outgoing is scheduled for Novem- over the last half century, and that evade the authority of States, or from le- message from annual maritime security ber 13-15, 2019, at SUNY growth has been largely driven by glo- gitimate end-user stakeholders, and aim roundtables and conferences such as the

Maritime in New York. balization and the consequent reduction to undermine regulatory compliance and CJOS COE Maritime Security Regimes www.sunymaritime.edu in barriers to trade. Any operational dis- general stewardship. Roundtable, held annually in April in ruptions in maritime transportation have Trans-national phenomena such as ter- Norfolk, VA and the USCG’s Maritime wider consequences for society, making rorism, organized crime, the prolifera- Risk Symposium, held annually in the the management of the associated risks tion of weapons of mass destruction or fall is that the maritime community a collaborative contribution to achieve a priority that should transcend industry even hybrid warfare, sometimes inter- needs better cooperation and situational a comprehensive MSA capability in and national boundaries. The maritime related, have an undeniable maritime awareness between key stakeholders and which all stakeholders’ requirements transportation sector’s symbiotic rela- dimension and impact the global econ- regimes (merchant shipping community are met and enhanced. Consequently, tionship with the global economy means omy. It only stands to reason then that included) as the ? rst critical step in wid- the Combined Joint Operations from the that the risks faced by the industry are human migration, climate change and ening the path to success.

Sea Centre of Excellence is acting with in? uenced by factors beyond its control. challenges to a world order based on Security in the global maritime com- key partners, such as the United States

Increasingly complex trade markets, free markets, human rights and the rule mons is not a given. Without a compre-

Coast Guard and State University of regulatory frameworks such as the EU in of law must be addressed by the relevant hensive, shared understanding of what New York, to advance the interests of a state of ? ux, the inexorable march of organizations, especially in the ? eld of is occurring in the maritime domain, the maritime community and to promote technological risks caused by advanced maritime security and for this we need a achieved through Maritime Situational information exchange and networking cyber threats and geopolitical shifts as common maritime strategy.

Awareness (MSA), vital opportunities across all stakeholders through discus- seen in Europe and the Middle East are As Rear Admiral JC Wylie, USN ex- to detect and mitigate threats or critical sion at venues such as the Maritime Risk all example of these extant risks to the plains in his original exposition of cu- vulnerabilities at the earliest opportunity Symposium and the Maritime Security global economy. Far from being isolat- mulative and sequential strategies of the may be lost. A comprehensive MSA net-

ed in silos, these factors are in constant early 1950s, maritime strategy is “one in work is required to facilitate information

There is important work to be done by interplay in complex relationships that which the world’s maritime communica- sharing and can only be established with all. Operating within this shared net- are dif? cult to understand, let alone pre- tions systems are exploited as the main the cooperation of law enforcement, mil- work is invariably more challenging than dict despite increasingly advanced data avenues by way of which strength may itary forces and the international mari- acting independently; this is exacerbated analytics tools and the introduction of be applied to establish control over one’s time transportation industry. by the complexity and sheer volume of 1

Arti? cial Intelligence (AI) in business enemies.” What the Admiral was re- The lack of modern and agile global information being processed. A lack of strategies and work ? ows. Clearly, an ferring to is the basic tenet of establish- and regional governance structures has common tools and vernacular in which increasingly connected world requires ing sea control as the foundation of a generated friction between the global- stakeholders operate makes the need for a maritime community response to the maritime strategy. The establishment of ized corporate sector, maritime authori- standardization critical; however, adapt- many interconnected risks in the mari- sea control has two critical conceptual ties and policy-makers that undermines ing policy, tools or operating procedures time commons. The numerous process- components – ensuring one’s own use of the maintenance of relationships neces- takes commitment, effort and invest- es of coordination and cooperation in the the sea and denial to the enemy of their sary to enhance. In an increasingly inter- ment. There are naturally certain na- ? eld of international maritime security use of the sea. If we look at transna- connected, inter-dependent and rapidly tional and commercial barriers to over- are based on acceptance of the impor- tional criminals, smugglers, pirates and changing globalized world, there con- come, but generating con? dence and tance of the world’s seas and oceans environmental polluters as common “en- tinues to be an absence of persistent re- trust among members through dialogue to the wellbeing and prosperity of the emies”, we can see a path to developing lationships between the ever-increasing and persistent partnerships, over time, people that depend on them. This close the framework for this common mari- number of key stakeholders in the global will facilitate the necessary cooperation. link between the security and safeguard- time strategy starting to emerge. maritime community of interest. Oper-

In the words of former US President ing of the seas and the development and In the maritime domain this immerg- ating according to disparate mandates, Barack Obama “if you are walking economic wellbeing of whole societies ing strategy requires an understanding objectives, areas of responsibility and down the right path, and you are willing drives natural partnerships. The world’s of time, space, risk, oceanography, the jurisdiction, there is an obvious need to to keep walking, eventually you’ll make navies and the international maritime global supply chain, critical infrastruc- develop a shared network and develop progress.” 1 Wylie, Joseph Caldwell , “Military Strategy – A General Theory of Power Control”, Annapolis, MD: Naval Institute Press, 1989 26 Maritime Reporter & Engineering News • AUGUST 2019