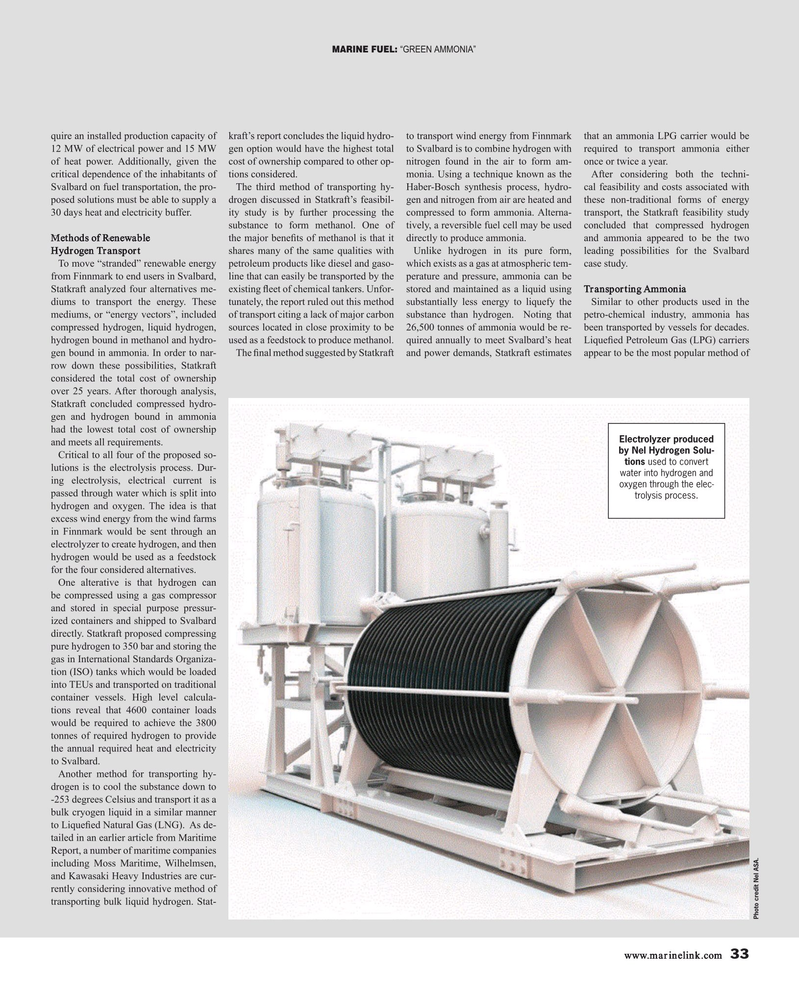 MARINE FUEL: “GREEN AMMONIA” quire an installed production capacity of kraft’s report concludes the liquid hydro- to transport wind energy from Finnmark that an ammonia LPG carrier would be 12 MW of electrical power and 15 MW gen option would have the highest total to Svalbard is to combine hydrogen with required to transport ammonia either of heat power. Additionally, given the cost of ownership compared to other op- nitrogen found in the air to form am- once or twice a year. critical dependence of the inhabitants of tions considered. monia. Using a technique known as the After considering both the techni-

Svalbard on fuel transportation, the pro- The third method of transporting hy- Haber-Bosch synthesis process, hydro- cal feasibility and costs associated with posed solutions must be able to supply a drogen discussed in Statkraft’s feasibil- gen and nitrogen from air are heated and these non-traditional forms of energy 30 days heat and electricity buffer. ity study is by further processing the compressed to form ammonia. Alterna- transport, the Statkraft feasibility study substance to form methanol. One of tively, a reversible fuel cell may be used concluded that compressed hydrogen

Methods of Renewable the major bene? ts of methanol is that it directly to produce ammonia. and ammonia appeared to be the two

Hydrogen Transport shares many of the same qualities with Unlike hydrogen in its pure form, leading possibilities for the Svalbard

To move “stranded” renewable energy petroleum products like diesel and gaso- which exists as a gas at atmospheric tem- case study. from Finnmark to end users in Svalbard, line that can easily be transported by the perature and pressure, ammonia can be

Statkraft analyzed four alternatives me- existing ? eet of chemical tankers. Unfor- stored and maintained as a liquid using Transporting Ammonia diums to transport the energy. These tunately, the report ruled out this method substantially less energy to liquefy the Similar to other products used in the mediums, or “energy vectors”, included of transport citing a lack of major carbon substance than hydrogen. Noting that petro-chemical industry, ammonia has compressed hydrogen, liquid hydrogen, sources located in close proximity to be 26,500 tonnes of ammonia would be re- been transported by vessels for decades. hydrogen bound in methanol and hydro- used as a feedstock to produce methanol. quired annually to meet Svalbard’s heat Lique? ed Petroleum Gas (LPG) carriers gen bound in ammonia. In order to nar- The ? nal method suggested by Statkraft and power demands, Statkraft estimates appear to be the most popular method of row down these possibilities, Statkraft considered the total cost of ownership over 25 years. After thorough analysis,

Electrolyzer produced and meets all requirements. by Nel Hydrogen Solu-

Critical to all four of the proposed so- tions used to convert lutions is the electrolysis process. Dur- water into hydrogen and ing electrolysis, electrical current is oxygen through the elec- passed through water which is split into trolysis process.

hydrogen and oxygen. The idea is that excess wind energy from the wind farms in Finnmark would be sent through an electrolyzer to create hydrogen, and then hydrogen would be used as a feedstock for the four considered alternatives.

One alterative is that hydrogen can be compressed using a gas compressor and stored in special purpose pressur- ized containers and shipped to Svalbard directly. Statkraft proposed compressing pure hydrogen to 350 bar and storing the gas in International Standards Organiza- tion (ISO) tanks which would be loaded into TEUs and transported on traditional container vessels. High level calcula- tions reveal that 4600 container loads would be required to achieve the 3800 tonnes of required hydrogen to provide the annual required heat and electricity to Svalbard.

Another method for transporting hy- drogen is to cool the substance down to -253 degrees Celsius and transport it as a bulk cryogen liquid in a similar manner to Lique? ed Natural Gas (LNG). As de- tailed in an earlier article from Maritime