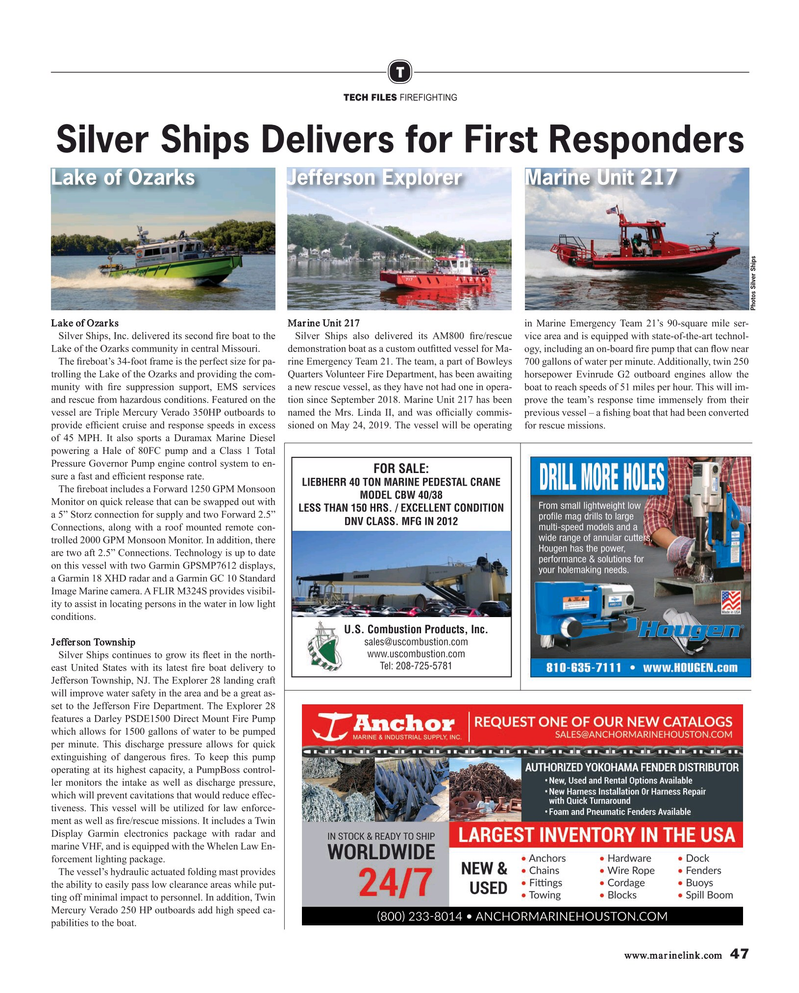 Lake of the Ozarks community in central Missouri. demonstration boat as a custom out? tted vessel for Ma- ogy, including an on-board ? re pump that can ? ow near

The ? reboat’s 34-foot frame is the perfect size for pa- rine Emergency Team 21. The team, a part of Bowleys 700 gallons of water per minute. Additionally, twin 250 trolling the Lake of the Ozarks and providing the com- Quarters Volunteer Fire Department, has been awaiting horsepower Evinrude G2 outboard engines allow the munity with ? re suppression support, EMS services a new rescue vessel, as they have not had one in opera- boat to reach speeds of 51 miles per hour. This will im- and rescue from hazardous conditions. Featured on the tion since September 2018. Marine Unit 217 has been prove the team’s response time immensely from their vessel are Triple Mercury Verado 350HP outboards to named the Mrs. Linda II, and was of? cially commis- previous vessel – a ? shing boat that had been converted provide ef? cient cruise and response speeds in excess sioned on May 24, 2019. The vessel will be operating for rescue missions. of 45 MPH. It also sports a Duramax Marine Diesel powering a Hale of 80FC pump and a Class 1 Total

FOR SALE: sure a fast and ef? cient response rate.

Monitor on quick release that can be swapped out with

LESS THAN 150 HRS. / EXCELLENT CONDITION a 5” Storz connection for supply and two Forward 2.5”

Connections, along with a roof mounted remote con- trolled 2000 GPM Monsoon Monitor. In addition, there are two aft 2.5” Connections. Technology is up to date on this vessel with two Garmin GPSMP7612 displays, a Garmin 18 XHD radar and a Garmin GC 10 Standard

Silver Ships continues to grow its ? eet in the north-

Jefferson Township, NJ. The Explorer 28 landing craft will improve water safety in the area and be a great as- set to the Jefferson Fire Department. The Explorer 28 features a Darley PSDE1500 Direct Mount Fire Pump which allows for 1500 gallons of water to be pumped per minute. This discharge pressure allows for quick extinguishing of dangerous ? res. To keep this pump operating at its highest capacity, a PumpBoss control- ler monitors the intake as well as discharge pressure, which will prevent cavitations that would reduce effec- tiveness. This vessel will be utilized for law enforce- ment as well as ? re/rescue missions. It includes a Twin

Display Garmin electronics package with radar and marine VHF, and is equipped with the Whelen Law En- forcement lighting package.